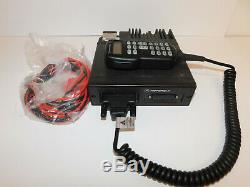 Motorola Astro Spectra Plus 800mhz P25 Digital 9600 Baud Trunking Phase 1 radio with ADP Encryption and Multikey. Hand held control head model, surveillance / undercover radio. Host/DSP Firmware: Host 9 / DSP 16 (Last current firmware for the AN Model). These radios program with Astro 25 CPS 20.01.00 (Same CPS as the XTS/XTL 2500, 5000, etc) Software NOT included. All of these radios have ADP Encryption in them, some of them have an internal UCM also, some are DVP-XL and some are a mix of DVP-XL and DES-OFB. I believe they were all reflashed at some point to have consistent ADP across the board and be compliant with rebanding and 12.5khz channel spacing. These were all pulled working from a 9600 baud Phase 1 system that was upgraded to Phase 2. All radios show where they were reflashed with an IButton/Flashkey they have flashed stickers on the rear of the unit. D1 B1 G806: ASTRO IMBE Digital Operation D1 B3 G114: Enhanced Digital ID Display D2 B4 G298: Hardware Multikey Encryption w/ OTAR D6 B4 G51: SmartZone Systems Operation D9 B1 W947: APCO Packet Data Interface D10 B3 G173: SmartZone Omnilink MultiZone Operation D11 B4 G361: ASTRO 25 9600 Baud Trunking D12 B3 G193: ADP Software Encryption. Radio will include a new power cable and a used good hand held control head (HHCH) microphone. The item "Motorola Astro Spectra Plus W3 800mhz P25 9600baud Trunking Digital Mobile Radio" is in sale since Sunday, October 27, 2019. This item is in the category "Business & Industrial\Facility Maintenance & Safety\Surveillance & Alarm Equipment\Two-Way Radios".

The seller is "secure_communications" and is located in Southwest USA. This item can be shipped to United States, Canada, Mexico.